05/02/2018 - 05/09/2018
Facing the nest building door with my crossbody bag resting on my bum, I glanced to my right, catching three men in their 20s walking up the small street behind me. Small backpacks. Tourists. I turned back to see if Pedro finished placing the trash bin inside and saw a sudden change in his facial expression. No longer friendly. Like a werewolf, shapeshifting into a fierce football player, he screamed at the air behind me, ready to tackle. What the? I jerked my head to the left, one of the three travelers inches away, about to pick pocket. Damn. My bag was open. The thief quickly turned and walked away. Oh the audacity, right outside my door. And no sound. Thank my host nothing was missing.
​
Nest@Lisbon is not just a nest. They look after you, even if it takes a physical transformation. They are my first Airbnb, setting the bar high. Will my future Airbnbs measure up? The fear of disappointment is real.
-- Airbnb Review (with five words changed, story under TRAVELS page) for Nest@Lisbon. 05/14/2018

​The Chinese egg tarts at dim sum restaurants were of Portuguese influence. With slews of cafes on every street of Lisbon and pastéis de nata (egg tarts in Portuguese) in abundance, I was worried that I would smell like one by the end of my quest for the original delicacy. And I might if all I did was cafe-hopping every day, looking for the best nata.

​So many restaurants to try and so much to see in the sunny capital of Europe, the coast, and the Sintra Mountains. My most unexpected find, however, was a print by Jorge Barradas laying on the ground at the Feira da Ladra flea market. I couldn't take my eyes off the piece. As I contemplated how to get it back to LA unscathed, the seller spoke the name of the artist to me like I knew who he was. And I gave no indication otherwise. Because google always helps a sister out. The Translate tool revealed a key figure at renovating Portuguese art in the 20th century.

"How much?" I asked. "Five euros," the seller replied. I suppressed my surprise and said "I'll take it."

This is the piece that sent me searching up and down the city of seven hills for cardboard big and thick enough to keep both the print and the mat intact in my check-in luggage. 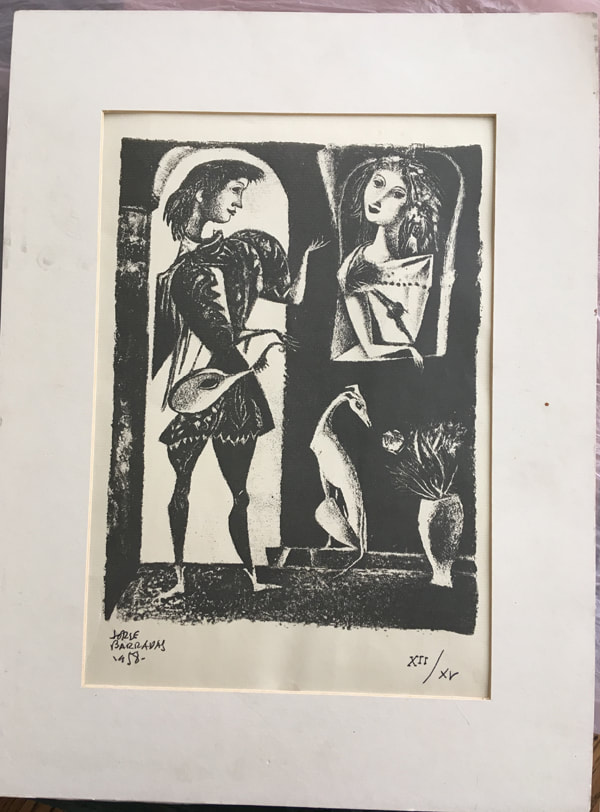 I spotted my treasure, a stained strawberry flat/tray shipper, sitting on top of a bunch of boxes outside a mini mart. The owner waved me off like a fruit fly when I asked if I could have the berry flat. He had no idea how happy he made me. My picture came home with me as beautiful as it was on the flea market ground. I framed it keeping the dirt marks and all. Lisbon dirt. Love it.

Comparing to the Portuguese version, Chinese egg tarts are smaller, and the crust more pie-like, dense, not flaky. I've only tried the egg tarts from these three places: The World Needs Nata cafe outside ​São Jorge Castle, Manteigaria at the Time Out Market, and the original bakery Pastéis de Belém. While their crust are all similar, the Manteigaria custard is runnier and sweeter than the other two. Factoring in the taste, wait time, and distance from my nest, the little cafe next to the castle earns my vote.
© 2018 Janey Play