Farmers market is seasonal, and livestock needs time to grow. Availability varies, that's what makes it fun - no need to use exact same things; every week is a different stew! I steam all hard veggies like kabocha, butternut squash, and potatoes first so they are easier to cut, and take less boiling time to get soft/creamy.
​

Use about one pound of meat/sausage/seafood of your choice. No vegetable or cooking oil needed. Ground pork or belly/fatty cuts tend to be quite oily. I cook ground or fatty meats in the pot first, scoop out about 1/2 to 2/3 of the oil for other use (keep about 2-tablespoon of the oil in the pot) before adding water.

If sausage is used instead of meat, I bake the sausage first, then slice, and add the pieces and juice from baking to the stew. Go easy on adding extra salt.
​

Try the food combinations on this page without the meat or seafood. I recommend adding 1 tablespoon of olive oil and 1 tablespoon of avocado, or almond oil, or whatever combination you like or just 2 tablespoon of an oil of your choice while stew is simmering. Only need to simmer veggies for about 30-40 minutes most of the time.

Steps for most stews unless otherwise noted:

Because of its sweet and sour taste, this stew is my new favorite! Until the following week. Then I fall in love with another stew. 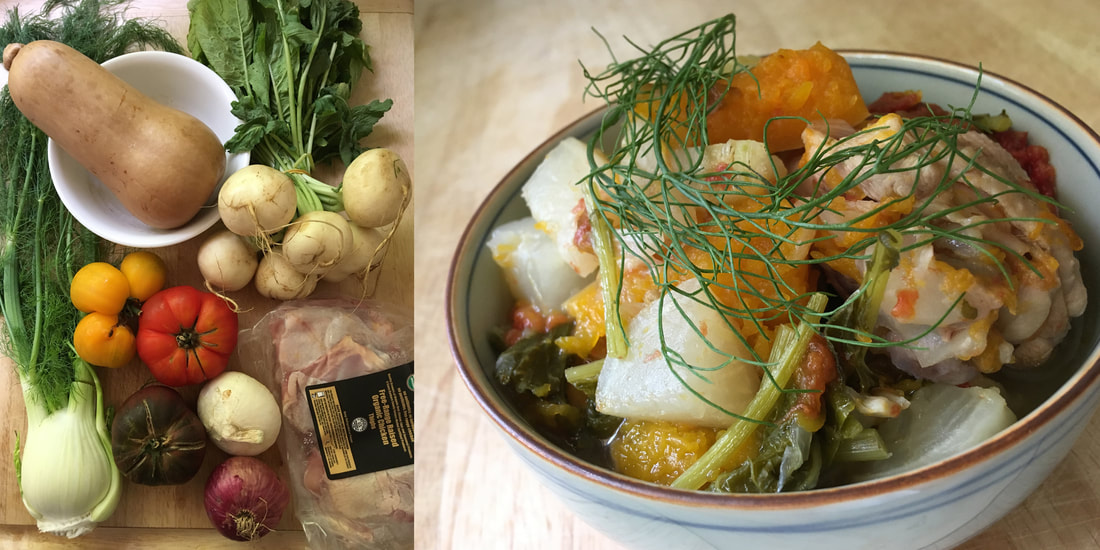 Similar to the general steps, I boiled meat and hard veggies like Fennel, onions, radishes (heads only, add the leaves later) in the pot for 30 minutes first before adding tomatoes and steamed butternut squash and let simmer for another 30 minutes. If you didn't steam the butternut squash, then it needs to be added to the pot in the beginning. I mixed in the radish leaves and some salt at T-5 minutes. Easy and delicious.

For this stew, I used the bulb of the fennel, saving the leaves for decoration and other dishes. 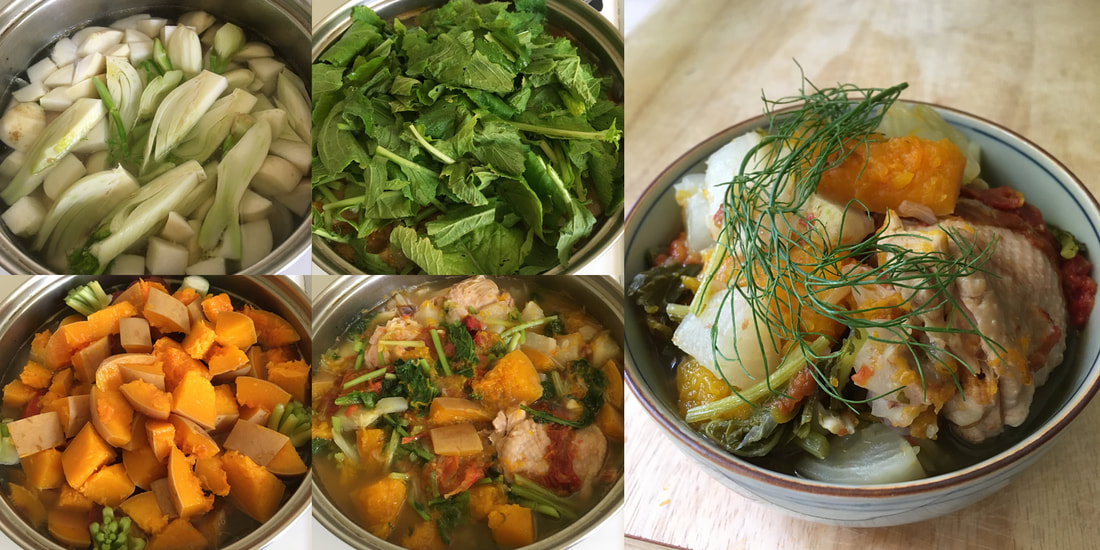 Stew and Pork Slices with Garlic Soy Sauce
I used pork jowl but the belly cut is the best for making the pork slices. Stew ingredients are similar to the above with additions of potatoes and Japanese sweet potato.

The difference with this stew is that I boiled 1/3 pot of water (~5 cups) and simmered the pork for one hour first without veggies. To test, if a chopstick can go through the meat then it's ready. Remove pork from pot and boil the vegetables with the pork water. Let simmer for one hour as before and then add the seasoning. Slice the pork.

Sauce for the pork slices: Minced garlic and soy sauce 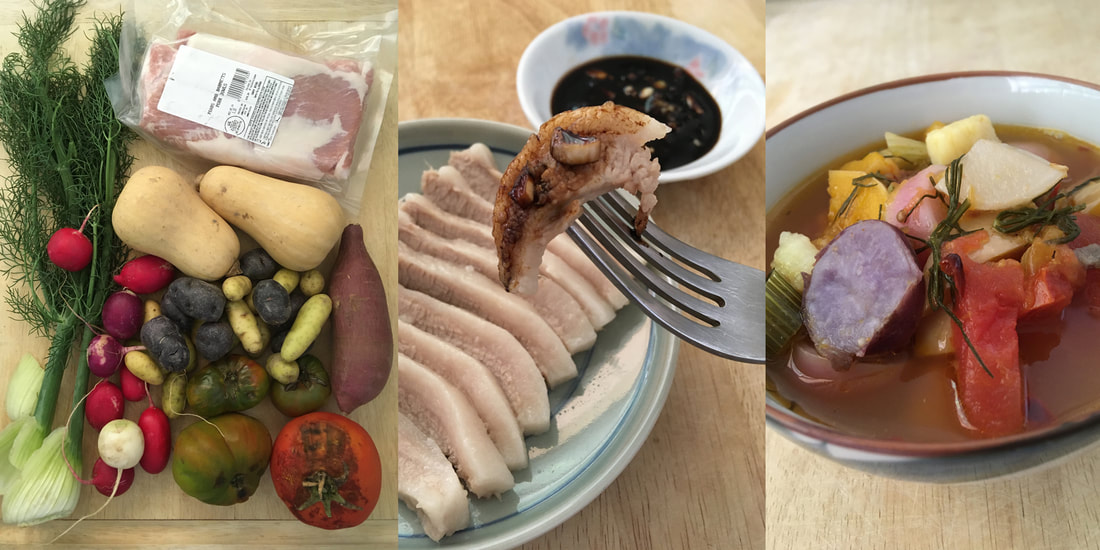 Tip for peeling garlic: Smash the cloves with a meat cleaver or a hammer on the chopping board, the skin will come right off.

When I don't feel like fetching heavy duty tools for a small job, I grab my sturdy mug with a flat bottom. I don't recommend using glass.

This boiled pork dish over rice is very popular in Taiwan. The meat is tender, but if you feel it's too fatty, you can dry fry them to make lard (see Roast page -> Pork Roast) or fried rice (second example on Weekend Brunch page.)

Seasoning for the Stew: Salt and chili flakes 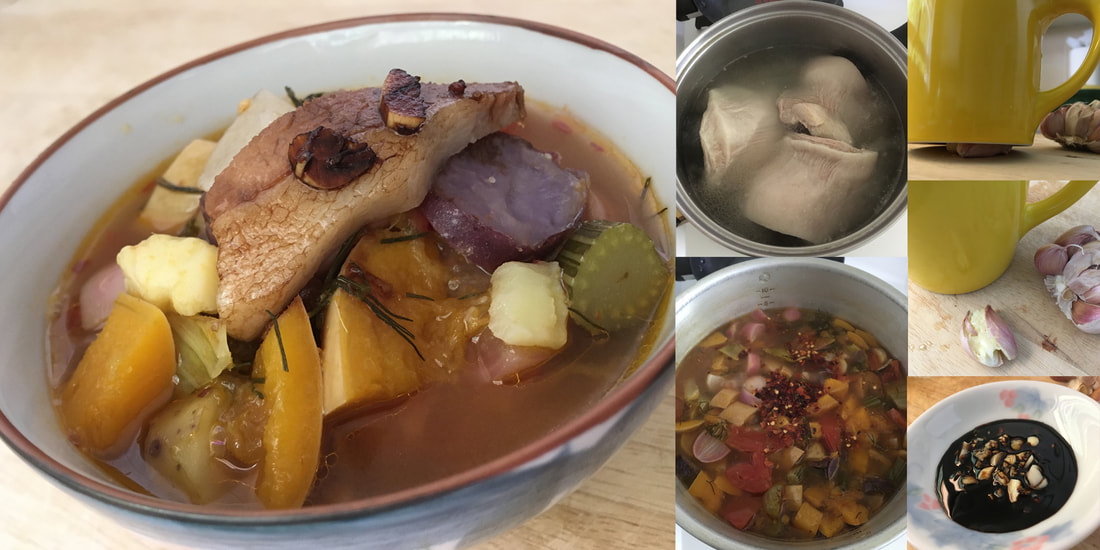 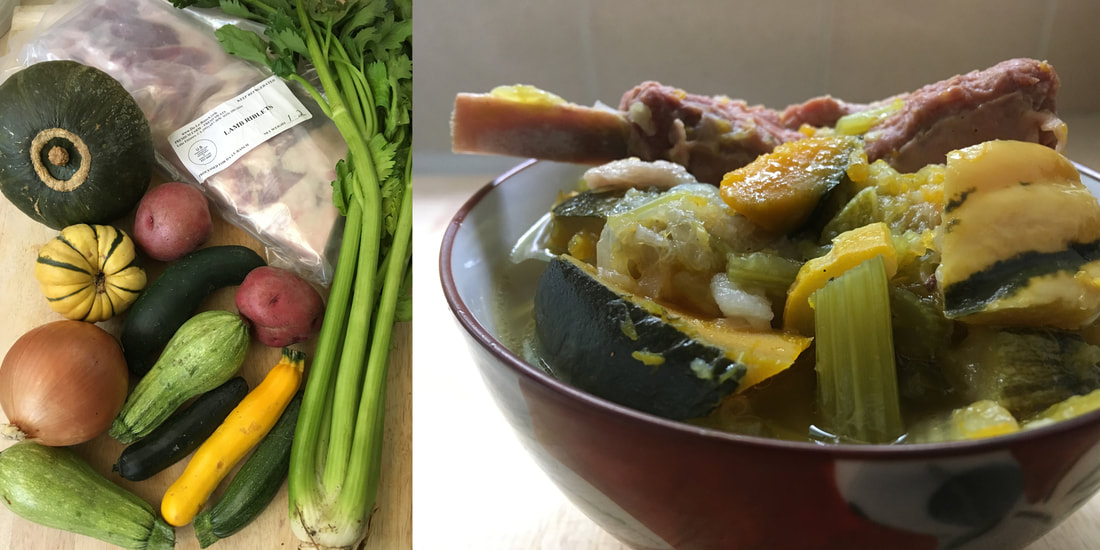 Steps: Follow the general steps. I cut the ribs, steamed hard squash and potatoes first. Can use both celery stems and leaves.
​​ 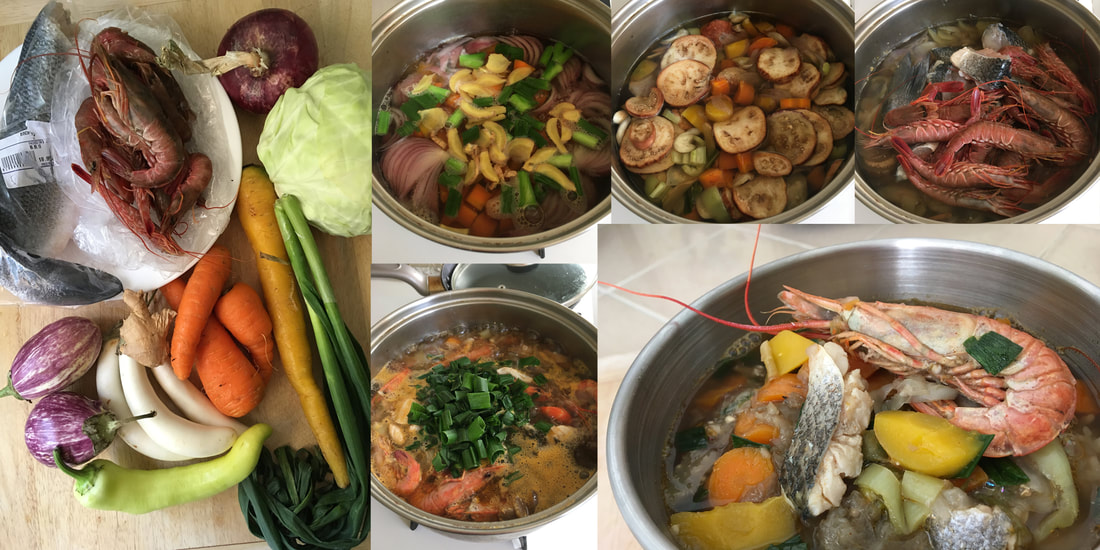 Season the fish with some salt and let sit for 30 minutes (longer ok.) Following the general steps, boil/simmer the carrots, cabbage, onion, ginger, and the top half/white part of the green onions for 30 minutes first. Then mix in eggplants and sweet pepper. Add more water if needed so the vegetables are loosely immersed in the pot. Let simmer for another 30 minutes. Cut fish to smaller pieces. Add fish and shrimp, turn up the heat to medium and cook for 5 minutes. Season to taste and mix in the remaining green onions.
​

To clean clams (tip from my friend Uri, otherwise this dish would be named Sandy Stew): Immerse in salt water (salty like the sea) for at least 5 hours for clams to spit out sand. Place in a section of the fridge that's not too cold. I cleaned twice (2 x 5-hrs) starting the night before.

I pre-soaked garbanzo beans overnight and steamed the carnival squash. The skin of the squash is very hard even after steaming - scoop out the inside for the stew, discard the seeds.  Can put finished stew, pasta, or fried rice in the beautiful casing, but I tossed it before I thought of it. Next time! 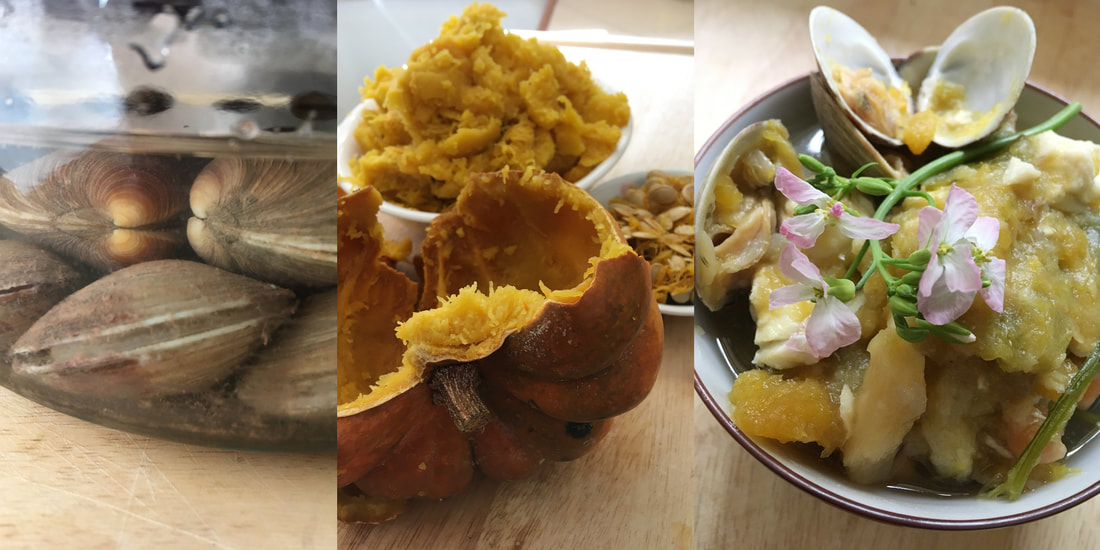 ​General steps + if radish is used instead of flower greens, add it to the pot in the beginning. Simmer vegetables except radish flowers for 1 hour. I did mine for about an hour and half, might have been longer because I lost track of time/too busy with other dishes, just means stew is creamier/less chunks. Then add the flowers including the stems (remove the really tough parts,) salt, clams, and turn up the heat to medium to cook for another 15 minutes or until the shells open. Halibut T-5 minutes. ​

I picked up more carnival squash from the farmer's market the other day. The flesh went into a stew, and the shell for a simple dish. Portobello mushrooms and garlic chives stir-fried with 2 strips of bacon.   ​ 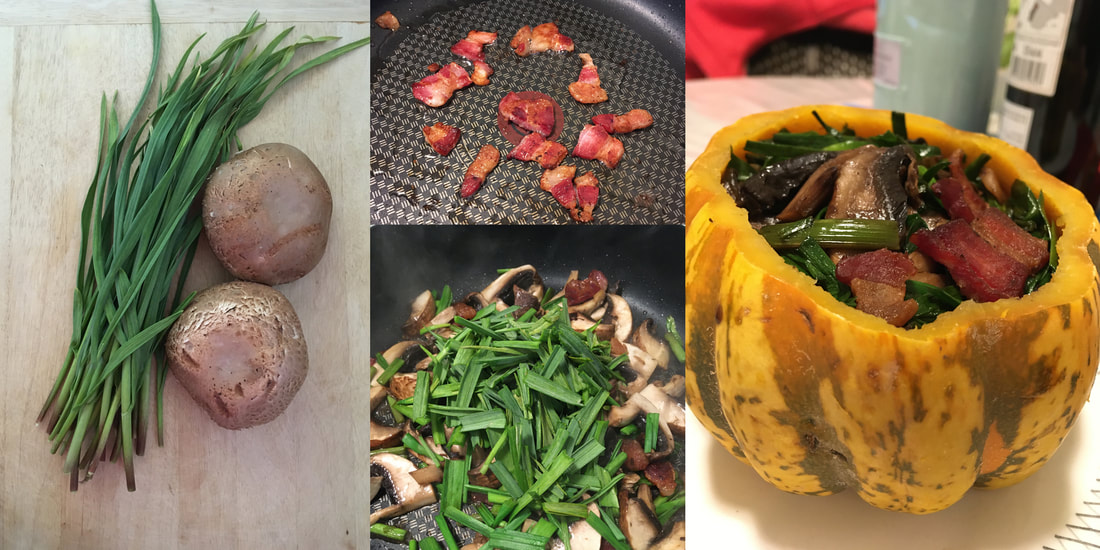 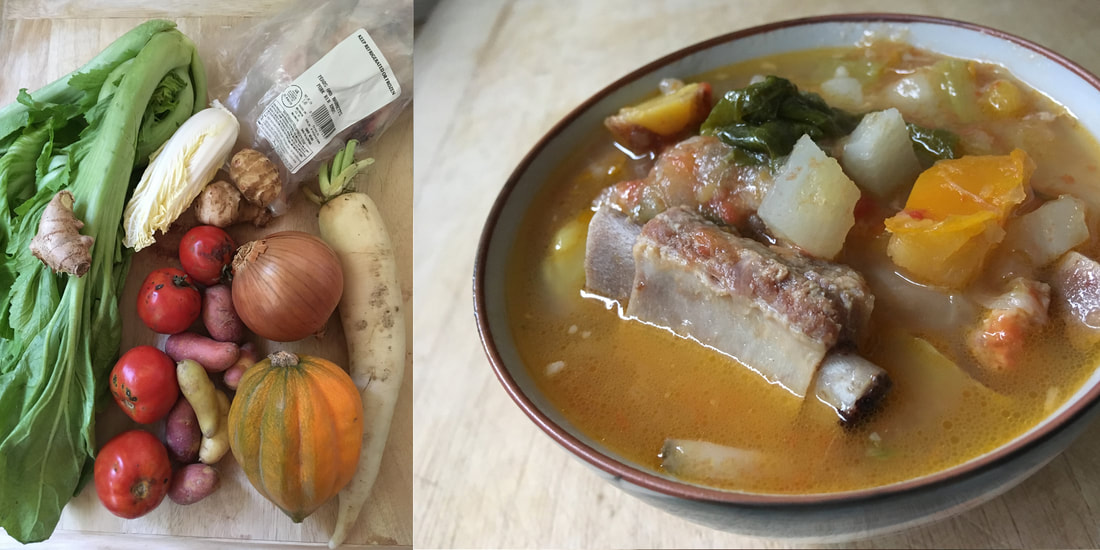 Made this for my Australian visitors. 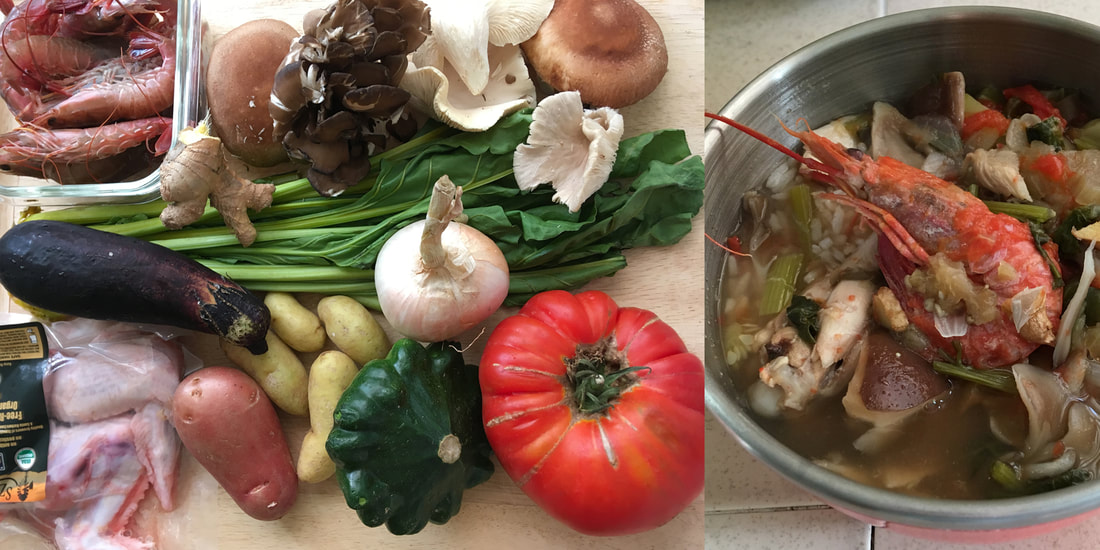 Same as the general steps. Boil water, add chicken and the chopped vegetables (I added mushrooms later, but you can add it in the beginning too if you want to toss everything in.) For this stew, I boiled it for about 1 hour and 10 minutes, mixed in the mushrooms, boil for a few minutes, added salt to taste, ​then the prawns and cooked for anther 5 minutes. Serve with rice or noodles/pasta.

Fun Stew - How else would you describe an adventure? 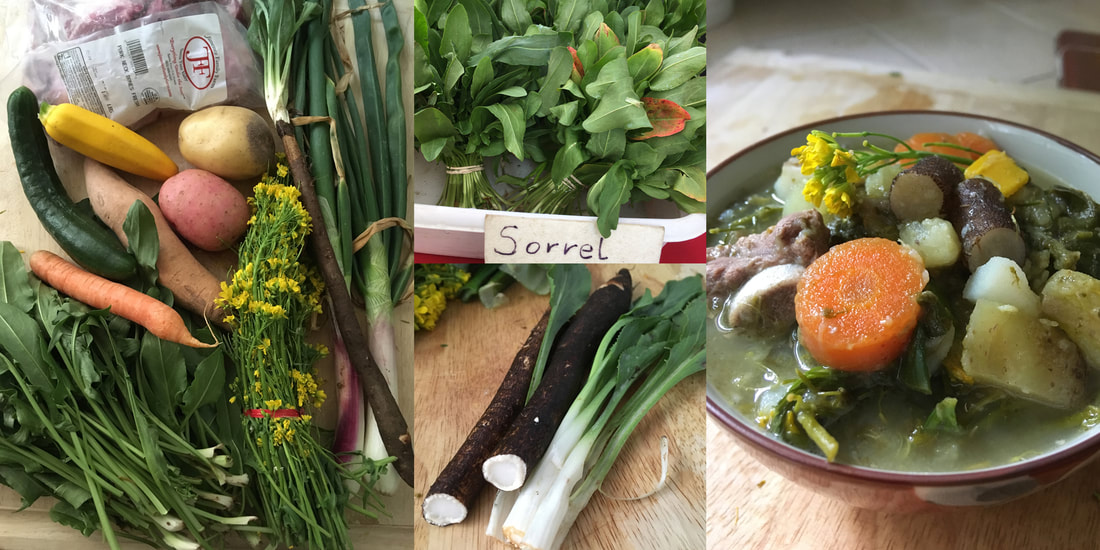 This is what happens when I see things I haven't had - I add it to the pot!

The combination gave this stew a Southern collard greens flavor.

Steps: ​ Follow the general steps. I steamed potatoes, carrot, and sweet potato first. I added one more cup of water for this one and simmered everything for 1.5 hrs. Sorrel and rapini flowers went in the last 5 minutes. 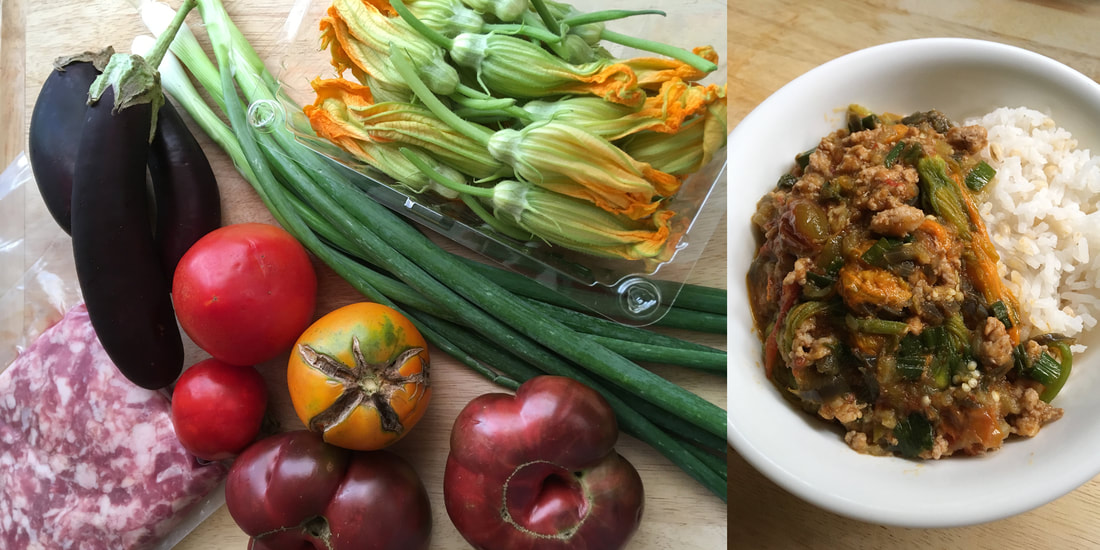 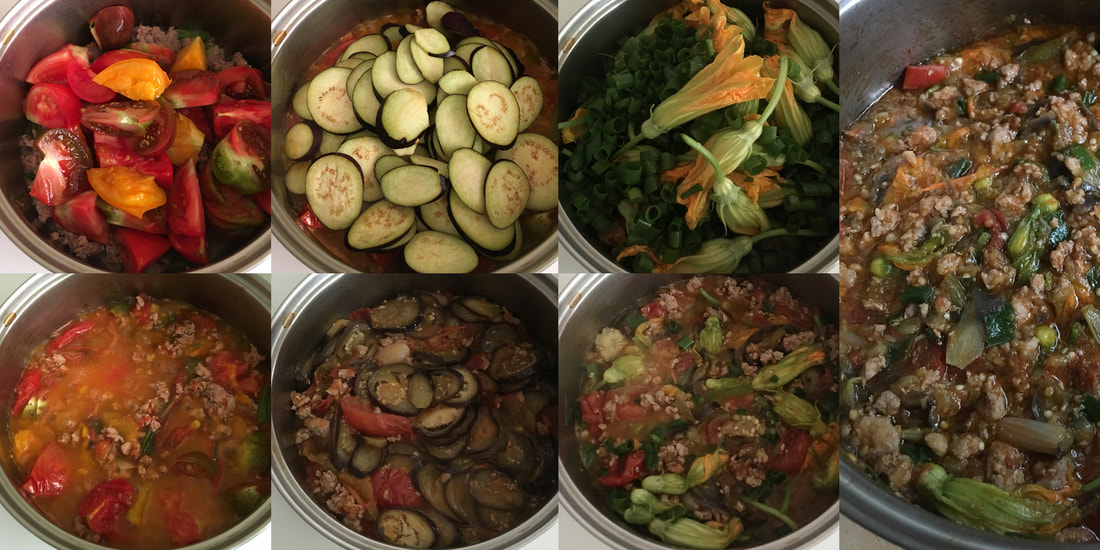 I cook ground pork in the pot first to get some juice/oil over medium heat, scoop out about 1/2 to 2/3 of the oil, then add the top half (white) part of the green onions, tomatoes, mix and cover, let it cook to make sauce (no heat reduction,) about 20 minutes. Add eggplants and continue to cook until soft. Mix in the bottom half of the green onions and squash blossoms if you have it. Lower heat and add spices. Cook for a few minutes and serve with rice or pasta.
​
​ 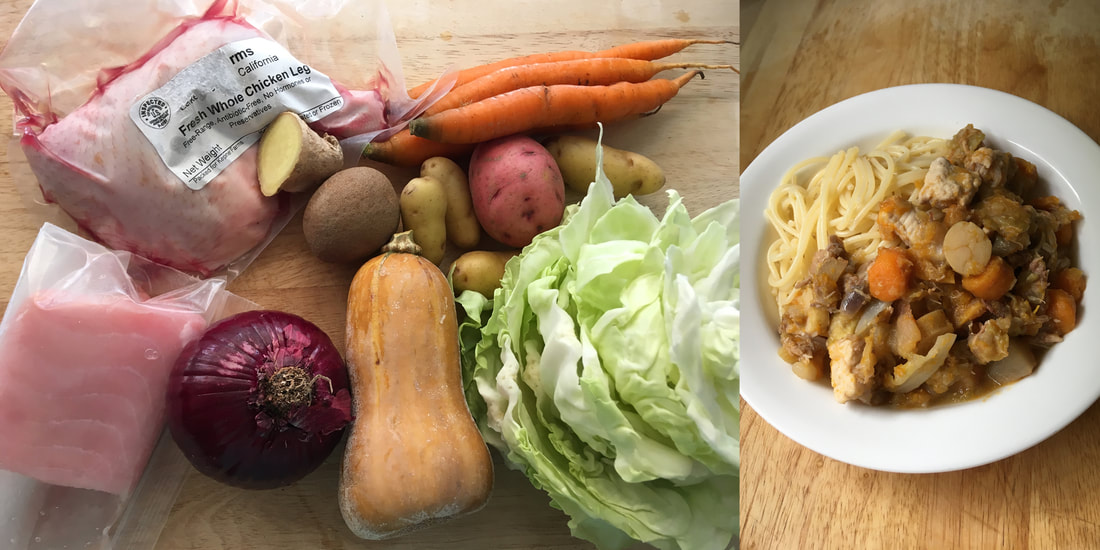 Spice: salt and pepper
​
Optional: one pound of meat of your choice, I used chicken leg and fish (a small piece of shark in this case, flavor is very mild and cubed and added to the stew in the last 5 minutes.) 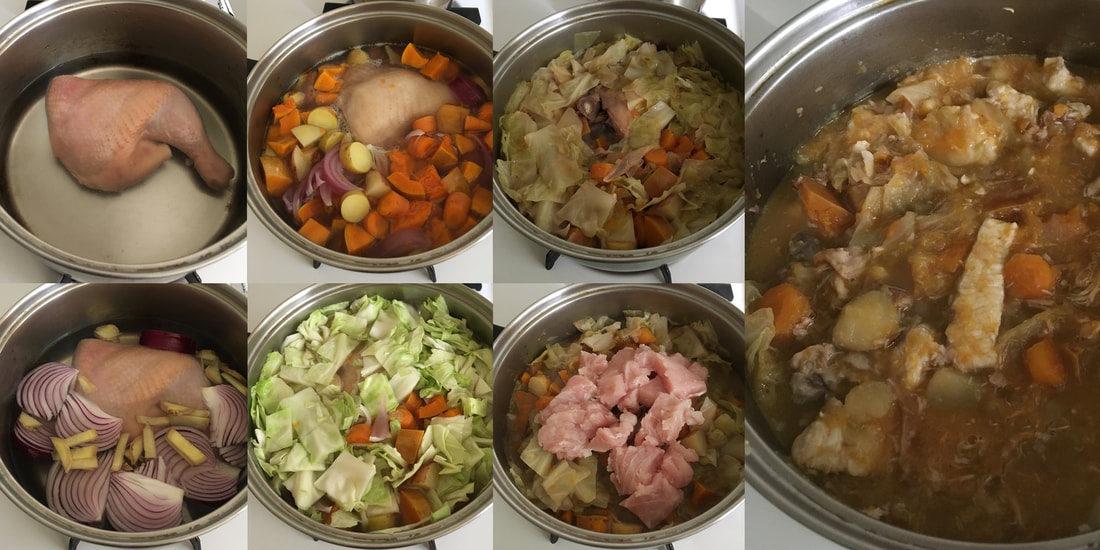